As a big fan of BBC's Ripper Street, I love seeing all the wonderful Victorian details and the programme's portrayal of how Victorian crime detection actually worked. But have you ever wondered what would have happened next to the people they arrest? Chances are they would have ended up in Holloway Prison while awaiting trial.


By the late nineteenth century, Holloway Prison was a 'trial' prison for men suspected of having committed a criminal offence. It also held convicted female prisoners and women awaiting trial. As a result, the male and female sections of the prison were very different. For the men, there was no hard labour and they wore their own clothes, not prison uniforms. 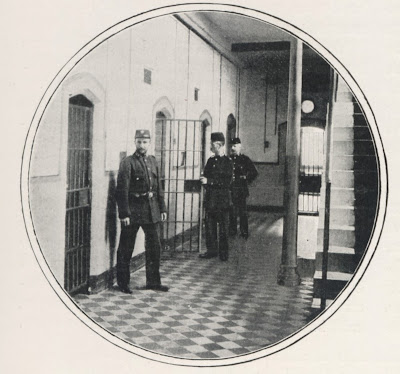 If they were wealthy, these men could even take advantage of the 'superior accommodation' highlighted by Living London (1901): 'A certain number of cells are fitted up, not luxuriously, but with bedstead, and table, and chest of drawers, for which the occupant is charged a shilling or two per week.'

They could also enjoy better food: 'While the poorer prisoners must be satisfied with the prison diet, those who can pay - and so the world wags always! - may "supply themselves". There are eating houses just outside the gates ready to contract on the official scale for breakfast, dinner, and tea, or the prisoners depend on their friends to bring in their meals. A large amount of work is thrown upon the prison officials in this matter of food. It is brought in tins, and basins, and bundles, tied up in towels or red handkerchiefs - great slices of meat, cold vegetables, cold bacon, eggs, and loaves of every variety, and the utmost care must be observed to give each his own proper allowance. The regulations, too, allow a small quantity of stimulant, a pint of beer, or half-a-pint of wine, and here, again, there is endless troubles among the bottles, and tankards, and cans.' 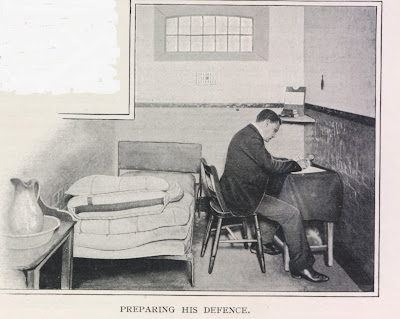 Each week, there was a similar pattern of activities in Holloway with certain hours set aside for interviews with legal advisors: 'Lawyer and client sit alone in the room specially provided, quite private as regards sound, but with a glazed side so that the warder on duty may keep his eye on all that does on. Solicitors seldom work without fees, and the penniless prisoner - once more it is money that rules - must work unaided by advice. He may have as much paper as he pleases, and can draw up any number of statements.'

It was the session days when trials were heard in court which were the busiest in Holloway:

'... the great vans are loaded for the journey down to the courts, and escort duty falls heavily upon the officers. ...there is much business in connection with papers, and especially the personal property of the accused, which must go down for immediate restoration on acquittal. No one can be detained after a favourable verdict is given, and all effects - money, watches, jewellery, and so forth - must be handed then and there to the discharged prisoner as he leaves the dock a free man.' 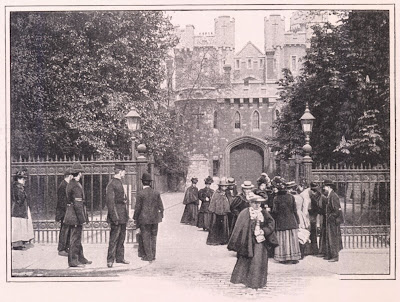 Perhaps most striking of all, Living London highlighted the fact that three days a week, there was a great gathering of detective officers at Holloway. I can just imagine a real-life version of Detective Reid arriving at the prison:

'...they come from all the London divisions, and their business is to run down the men they know, often enough a man "much wanted" who has long evaded pursuit, but having been caught for some minor offence is now "remanded for inquiry"...Our police use both the Bertillon system of identification by measurements and that by "fingerprints" but they cling still to the older aids of memory and instinct.' 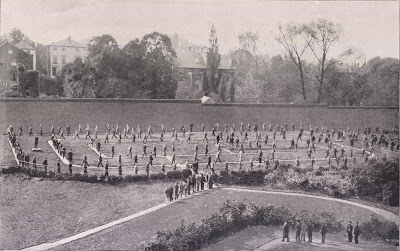 There was an hour every morning for exercise in the yards and the men were a real motley crue:

'Here is a "swell" in frock coat and tall hat; he is of good presence, with a pleasant face, and is charged with being the moving spirit of a Long Firm fraud. Behind him walks a London pickpocket - small, active, with a fox-like face and the loping gait that carries him fast beyond pursuit; followed by costers and riverside characters, seafaring men - a Lascar, perhaps, or a heathen Chinee - the butcher, still in his blue blouse, the artisan in green baize apron, just as he was taken from his bench after he had done the deed.'

Naturally, 'police days' were dreaded by the inmates and the detectives regularly found their 'most wanted'.

Buy Signed Copies of A Visitor's Guide to Victorian England 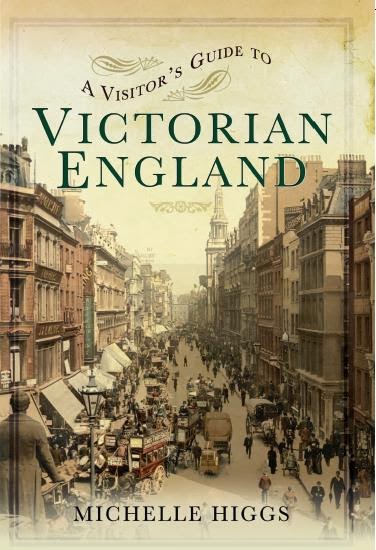 A Visitor's Guide to Victorian England